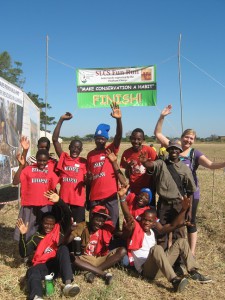 Tabitha comes from Tucson, Arizona where she spent her high school years hiking in the desert mountains and volunteering at animal shelters. She went on to study at Northern Arizona University near the Grand Canyon where she earned two Bachelor’s degrees, one in Zoology and one in German. During this time she conducted research on avian ecology, algal genetics, prairie dog behavior, and was able to study abroad for one year at the Universität Konstanz in Germany. After graduating she interned with the Student Conservation Association at the Bonneville Lock and Dam in Oregon to record sea lion predation on salmonids. It was here that Tabitha gained her first experience talking to the public about human-wildlife conflict. Shortly thereafter, she moved to Columbia, MO to begin her doctorate in biology at the University of Missouri under the guidance of Dr. Lori Eggert. Tabitha’s research focused on the evolution and ecology of the African elephant, which included a field study on human-elephant conflict in Kenya that was chronicled on The Dung Diaries blog (https://dungdiaries.wordpress.com/) . While in Kenya, she taught science lessons in local schools and realized the impact of and need for in situ conservation education.

While completing her research, Tabitha pursued her newfound passion for informal education by founding an after-school science club and writing a weekly “Ask a Scientist” newspaper column for the Columbia Daily Tribune. Upon graduation she moved to Birmingham, AL to work as the Manager of Science Education at the McWane Science Center. There she taught a variety of programs that included handling live snakes, blowing up balloons filled with hydrogen, and making ice cubes out of liquid nitrogen. However, her passion remained with conservation education and so she is extremely proud to now be a member of the Chipembele Wildlife Education Trust team.