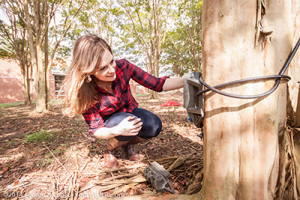 Stephanie’s research interests revolve broadly around topics in animal behavior, molecular ecology, movement ecology, and the natural history of mammals. She is especially interested in research with conservation or management implications, and particularly on endangered and threatened species. Her passion for wildlife was ignited when she enrolled in a study abroad program at the School for Field Studies in Kenya. There, Stephanie realized that she could make conservation and wildlife management a career, and became inspired by East Africa’s vast assemblages of large mammals. Stephanie was particularly struck by African savanna elephants (Loxodonta africana) and their social behavior as they live in complex groups of related females that change size and composition over time and space (Archie et al. 2006). These groups are important for elephant conservation because reproductive success is higher, stress is lower, and groups are more able to defend themselves against predators. Elephants are also among the most intelligent animals, and have unique behaviors such as touching and spending long amounts of time with elephant bones that they come across (McComb et al. 2006).

Stephanie’s experiences in Kenya helped her form the questions for her dissertation research. Instead of working on African savanna elephants, she transitioned to African forest elephants (Loxodonta cyclotis), which have been far less studied because they are difficult to observe in their forested habitat. Additionally, they are under extreme decline and endangered from increased poaching in recent years. Stephanie was interested in understanding if forest elephants lived in groups similar to savanna elephants. Forest elephants have been observed in natural clearings and savanna fragments in the forest, and these studies show much smaller groups, but it is unclear if groups actually are just as large, but more difficult to see because some members may be hidden in the forest nearby. Using a combination of non-invasive genetic sampling through dung, satellite telemetry, and observations, Stephanie investigated the hidden sociality of African forest elephants.