Our graduate student Kris Budd was awarded the Support for Advanced Scientific Research grant today from the Eppley Foundation for Research for her and Dr. Eggert’s proposal entitled the Genetic and Genomic Diverstiy of the Asian Elephant, which will fund Kris’ research into developing methodology to extract high quality DNA from Dung and fecal samples!

Kris is extremely excited about progressing her research. Thank you to everyone who helped with this proposal!

Senior graduate student Jacob Burkhart has a new publication in Ecology and Evolution made available today!

ABSTRACT
Understanding metapopulation dynamics requires knowledge about local population dynamics and movement in both space and time. Most genetic metapopulation studies use one or two study species across the same landscape to infer population dynamics; however, using multiple co- occurring species allows for testing of hypotheses related to different life history strategies. We used genetic data to study dispersal, as measured by gene flow, in three ambystomatid salamanders (Ambystoma annulatum, A. maculatum, and A. opacum) and the Central Newt (Notophthalmus viridescens louisianensis) on the same landscape in Missouri, USA. While all four salamander species are forest dependent organisms that require fishless ponds to reproduce, they differ in breeding phenology and spatial distribution on the landscape. We use these differences in life history and distribution to address the following questions: (1) Are there species- level differences in the observed patterns of genetic diversity and genetic structure? and (2) Is dispersal influenced by landscape resistance? We detected two genetic clusters in A. annulatum and A. opacum on our landscape; both species breed in the fall and larvae overwinter in ponds. In contrast, no structure was evident in A. maculatum and N. v. louisianensis, species that breed during the spring. Tests for isolation by distance were significant for the three ambystomatids but not for N. v. louisianensis. Landscape resistance also contributed to genetic differentiation for all four species. Our results suggest species- level differences in dispersal ability and breeding phenology are driving observed patterns of genetic differentiation. From an evolutionary standpoint, the observed differences in dispersal distances and genetic structure between fall breeding and spring breeding species may be a result of the trade- off between larval period length and size at metamorphosis which in turn may influence the long- term viability of the metapopulation. Thus, it is important to consider life history differences among closely related and ecologically similar species when making management decisions.

Are you looking to network with someone from the Eggert Lab? We are frequently in attendance at several conferences, but here are a few that are coming up!

Our graduate student Kris Budd was award the Trans World Airlines scholarship today. This scholarship will help to fund Kris’ upcoming travel to her field sites in Southeast Asia.

Thank you to all those who took the time to look over her proposal and write letters of recommendation and thank you to the TWA Scholarship committee for their acceptance!

Our newest graduate student, Joe Gunn, presented his ongoing research on determining the taxonomic status of the Neosho small mouth bass (Micropterus dolomieu velox). Joe has been working very hard in preparation of this presentation and it was very apparent! MDC managers were in attendance as well as past and present collaborators.

Congratulations on an excellent presentation Joe!

Our senior lab member Jake Burkhart gave a presentation entitled “Genetic Diversity of the Ringed Salamander (Ambystoma annulatum)” to the University of Missouri’s Division of biological sciences specialized seminar known proudly as Ecolunch. Ecolunch is a seminar series dedicated to graduate students in the division of biological sciences specializing in an Ecology based field.

Jake’s talk described the genetic diversity found in the ringed salamander, an endemic species to missouri and of conservation concern. His talk went great and had great interaction and questions at the end from the audience. Congratulations Jake! 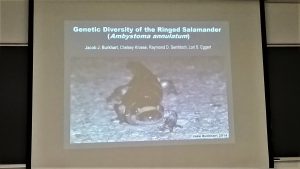 Our graduate student Kris was awarded a travel grant today from the Graduate Professional Council at the University of Missouri. She will use the travel grant to attend the upcoming International Congress for Conservation Biology to present her recent work on the genetic diversity of the Asian elephant.

GPC [gave] out around $50,000 in travel awards this year to MU graduate and professional students. The award is designed to assist MU graduate and professional students who are representing the University of Missouri by presenting research papers, posters or creative works at conferences. The GPC finance committee judges the quality of each application based on professionalism (spelling and grammar, appropriate word usage, formatting, etc.) and the completeness of the application materials [.]  – University of Missouri, graduate professional council 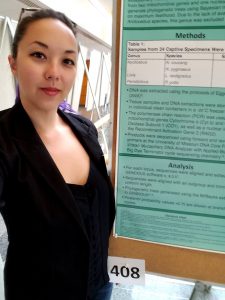 As a research project collaborating with anthropology PhD Candidate Rachel Munds, they investigated the evolutionary history of Lorisidae primates (Arctocebus, Loris, Nycticebus, and Perodicticus). They also looked at their phylogeny in relation to genes that influence coat color/patterning to better describe their taxonomy.

Congratulations to Chelsea on another successful research presentation!

Our graduate student Kris Budd, has been awarded the Douglas D. Randall Young Scientists Development Fund. This fund is a travel award that provides funding to undergraduate students, graduate students, and postdoctoral fellows at the University of Missouri who are conducting life-sciences research.

Kris is using the Travel Award to give a presentation on her Asian elephant research at the 28th International Congress for Conservation Biology (ICCB 2017) in Cartegena Colombia July 23rd through the 27th.

Our former PREP student David Vasquez Jr. was named one of the 2017 recipients of the NSF GRFP. David has since moved to study disease ecology at the University of Georgia, but we are still extremely proud that our dear friend was honored by receiving such a prestigious award!